“That was what the cardinal said to the capitalist”

It might have been something said jokingly between the common folk, or perhaps it was something the servants had picked up from the conversation of their masters.

But we have to admit, when looking back at history, there is no doubt this strategy, in an attempt to keep the mob in check, was applied.

Throughout the Economic system that dominated the European thinking, especially between the 16th and 18th centuries, poverty was seen as socially practical and natural even.

As long it kept the economic engine humming and ensuring the availability of plentiful cheap labour, it did not matter the poor suffered. (Source:The Economist – Penury portrait)

While the ‘Capitalist’ kept them poor, the ‘Cardinal’ kept them stupid: 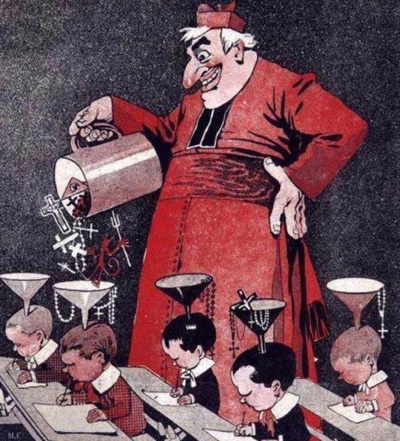 One of the main ways to control the common folk was through their fear of hell, and because none of them could read the Latin Bible, no one questioned their spiritual leaders.

But when translations of the New Testament were distributed in the common language, for example by William Tyndale, Cardinal Wolsey wrote to Pope Clement VII in 1523:

‘This new invention(The printing press) has produced various results, of which Your Holiness cannot be ignorant. If it has restored books and learning, it has also been the daily cause of sectarianism and schism. People are beginning to call into question the Church’s present faith and doctrines. Lay people are reading the Bible, and praying in their own language… The mysteries of religion must be kept in the hands of the priests.’

As the ignorance of the population made it easy for the church to keep control over them, they could not allow for people to become literate. This resulted in the persecution and execution of Bible translators, one of them was William Tyndale, who was tied to the stake, strangled to death and burned.

Whereas half a millennium ago the church did everything to keep information hidden, nowadays we are flooded by data and knowledge. Since the invention of the internet, there is no topic that you can think of, that has not been analysed a dozen times over and been discussed in detail. Currently, at the moment of writing, the size of the Internet is 12.850.000 Petabytes, and its growing steadily with 70 Terabytes per second. Tyndale and his fellow translators would be astounded to discover that the New Testament, now can be found in roughly 1400 languages.

But has the spreading of all that information caused the freedom and enlightenment that so many revolutionary thinkers aspired to achieve? Have we been made free from manipulation and control by governments, religions and other organizations?

Let’s do a little test:

The ones among us looking to take advantage of, and manipulate us, have long realized the power of fear. How many of these topics are consistently raised in the campaigns of politicians, how many of them are been used in speeches and debates? The newspapers are full of it, and even the marketing segment itself makes eager use of terms that inspire fear.

“The whole aim of practical politics is to keep the populace alarmed (and hence, to be led to safety) by menacing it with an endless series of hobgoblins, most of them imaginary.” – HL Mencken.

And although the purpose of these tactics is clear, and those who use them are not to be excused, the responsibility for our actions and reactions lies solely with us!

Feeling fear is in correlation with the unknown, and therefore a direct result of ignorance and the unwillingness to inform yourself about what you are unaware of.  So, as long as you do not inform yourself of what is on the other side, fear persists and makes you susceptible to what others tell you how to think, what to feel, who to believe and from whom you should be afraid.

As a consequence, we end up with a world full of scared, racist, discriminating and intolerant people.

Fear in itself is not a problem, it’s an emotion inherited from your ancestors that allowed them to successfully manoeuvre and survive in a dangerous, ever-changing world. The deep-rooted feeling to instantly judge the situation and to act accordingly (fight or flight) still pops up in the modern brain, even if we no longer face the same threats in modern-day living. Although our minds and bodies are still working in the same way as our ancestors, in how we respond to our modern concerns, we can not flee or physically attack these problems!

True, you might be able to avoid social situations or topics that make you anxious, but they are bound to happen in your life at the most inopportune moments. Now, just imagine how powerless you will feel when you are confronted with them. And when paralyzed by the fear of a real or imagined threat, your rational thinking is eliminated, making you easily manipulable to anyone who promises, safety from the threat.

It is time to inform yourselves!

“Nothing in life is to be feared, it is only to be understood. Now is the time to understand more, so that we may fear less.” – Marie Curie